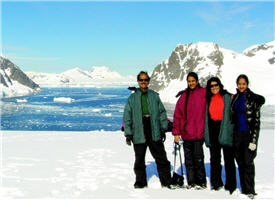 The entire trip was great and we enjoyed every minute of it. The Quark Expeditions is educational and fun filled trip with great staff. The cabins were excellent. The vegetarian food was delicious every day. The lectures were quite good and kept us very busy learning about the animals and plants and the geology of Antarctica. They showed us four parts ‘Shackleton’ at night followed by lectures on him and others who tried to reach South Pole. The end of the third day of sailing we reached Antarctic islands starting with Halfmoon Bay followed by Deception Islands. There were landings everyday for the next next five days, sometimes two times a day. One late landing was held at 10PM in broad sun light. After that and other days after the movie, people gathered around in the coffee/bar lounge until 2:30AM. It was near 24 hour day light and no one wanted to sleep. The expedition leader called out ‘good morning’ greetings in the morning from the bridge and I skipped many breakfasts, unable to wake up at 7AM. But we were all ready for 9:30 landing or lectures. The penguins were plenty, actually about 70 million strong and they smelled really bad. END_OF_DOCUMENT_TOKEN_TO_BE_REPLACED